The Free Mumia Abu-Jamal Coalition press release (see last image below) stated: “On Friday, December 18th a car caravan from Philadelphia, a bus from New York City, vehicles from Pittsburgh, Baltimore and other cities will converge in Scranton, PA to support political prisoner Mumia Abu-Jamal at a Federal Court hearing.”—and indeed they did. 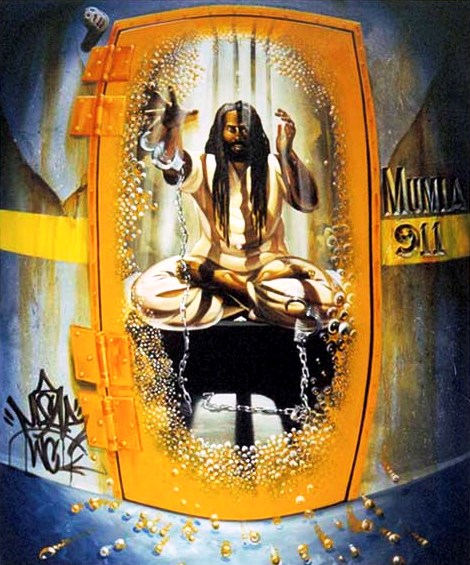 OIL ON CANVAS BY MEAR ONE

About 100 supporters came out to the first trial date at the William J. Nealon Federal Building to see if the Department of Corrections (DOC) will be required to provide a new direct-acting, anti-viral medication to Mumia Abu-Jamal, who’s untreated Hepatitis C has spun into an onslaught of “side effects” including diabetes and severe psoriasis. What makes this bigger than Mumia are the 10,000 other prisoners in the Pennsylvania prison system awaiting the same fate (and countless others across the country).

While the general awareness of Hepatitis C and lack of medical care in prisons (considered “cruel and unusual punishment by the US Constitution) gets brought to light, here’s a list of five things that stood out from Day 1 of the hearing:

Most of us hope to never have to sit in a court room but seeing the court process at work for yourself is a priceless experience. So far, Federal Court Judge Robert Mariani is doing something a lot of us don’t usually see, he’s judging the case and not Mumia’s humanity. This came in handy during the handful of “over-ruled” (aka “GTFOH” and “ain’t nobody got time for that’s”) he handed out to lawyers failing to make a strong case against Mumia. In fact the defense for the DOC looked very weak on Day 1 (you can tell them I said it), and the color-commentary in the extra courtroom for the public echoed that.

The cross-examination’s re-run of objections to Mumia’s testimony, the “why don’t we just dismiss this now,” the ‘rogue’ video evidence (gasp!) of Mumia walking* (as evidence that he’s still “too healthy”), and case citations that the judge took his time to review and swiftly deny, all added up to people actually doing their job. Insert your opinion of what the actual job of the justice system is here: _________________.

“Our persuasion can build a nation,” and once again women (of all colors) were present, accounted for, and heading up a lot of the efforts at the Scranton Stand. From the legendary Pam Africa and Suzanne Ross bringing the Philly and New York crews together to the many announcements of upcoming rallies (for everything from Manhattan jewelry stores with questionably political profits, to Donald Trump, to political prisoners still down like Oscar López Rivera and Leonard Peltier), to taking the witness stand, to assisting the elderly and disabled, to morale boosting—the ladies were (as usual) everywhere on the front lines.

Shout out to the men—including Joe Piette and others who were on top of every element from organizing, picketing and media, to defense. Consistent with Black Lives Matter and really every movement where women have stepped up in droves, we’re “strong enough to bear the children, then get back to business” indeed.

One of the biggest “pin to top” facts is Mumia being told he’s “too healthy” to get the new anti-viral HCV medicine and that it’s “too expensive.” WELP, the latter is not complete bull$hit—but kinda still is…and here’s why. The reported 95% success-rated pill that would replace an entourage of unsuccessful treatments for non-prisoners and prisoners like Mumia—in theory also saving the DOC money and time, is a reported $1,000+ PER PILL by Gilead Sciences.

According to Board Certified internist Dr. Joe Harris (shout out Harlem) who was the first witness to testify after Mumia (and did a relentlessly incredible job), the 84-90 pills required for Mumia’s full treatment has been applied for much cheaper in Rwanda and other African countries where Hepatitis C rates are highest. For this added reason “they’re treating everybody,” the good doctor says.

How much cheaper you might ask…how does $5 a pill sound? Yes, one digit, not four! Still a lot to think about, but these same pills are being sold at $5-a-pop outside the United States. (Hepatitis C is a liver infection spread person-person from exposure to an infected person’s blood. It can spread unknowingly and rapidly throughout a population if untreated. Mumia had a blood transfusion years ago that exposed him to it.)

Clearly no matter who wins, loses (or dies?) pharmaceutical companies getting paid.

Mumia Abu-Jamal is known by supporters around the world for being real, intelligent, and articulate with a unique iron-clad voice you’ll recognize immediately. He’s consistently been a writer, journalist, and activist for justice before and during the 30+ years he’s been imprisoned. Many will attest to his “unf*ckwitable” spirit above all. One of the greatest lessons anyone can learn whether we agree with him or not, is his composure and approach to standing up for himself, especially in a court of law. Mumia spoke clearly, knowledgeably, and carefully during his testimony.

Whenever he didn’t know the exact answer to a question, he took his time before saying a word or added an “I don’t have an independent recollection of that.” He was calm, accurate, aware, projected his voice, his body language was sure, he was fair in his answers.

(Not taking your time to think and speak is something that gets a lot of people caught up, especially under interrogation—see “The Central Park Five” or the case of star athlete Marion Jones). When asked his final thoughts, he said simply: “If I get it [treatment] I can live. If I don’t, I may die.”

Grassroots organizing needs two things and while one doesn’t always come together, the other is always, always, necessary. The first was already said-organization! Nothing can ruin a revolutionary experience or its results more than a poor game plan going in and/or a lack of leadership and collective know-how in handling spontaneous situations. The other underrated and overlooked item is the one thing Ché Guevara said every true* revolutionary is fueled by: love.

The participants of the Scranton Stand held it down on BOTH fronts absolutely. From a neat coordination of people inside and outside the courtrooms (big shout out to the young people!), to the positive vibes that made it OK to talk to your neighbors or make an announcement, to the brave and “non-reactionary” stand when rally’ers were provoked by a gun-toting intimidator (which the on-site police did nothing about).

To plenty of water, food and snacks (“this is a food-oriented movement” says Suzanne Ross

), to the New York bus taking up a collection to tip the bus driver (who was later found to also have been provoked by police)—no one was left on their own and no moment was completely out of pocket.

“Prison authorities willfully ignored Mumia’s health crisis until a fellow prisoner, Major Tillery, confronted prison superintendent John Kerestes…the superintendent refused to listen and Mumia went into a diabetic coma. Major Tillery was shipped to another prison to be placed in solitary confinement for four and a half months. Supporters initiated a campaign that led to a discovery of medical proof that Mumia’s ailments stem from untreated HCV that he contacted via a blood transfusion after being shot by police 34 years ago. The DOC is denying the lifesaving treatment ‘until the final stages of the condition’ – which would be equivalent to a death sentence for Mumia.” – Press Advisory (see below)

The hearing has taken multiple recesses and is ongoing.

Mumia we got you! Outside courthouse at Scranton, PA

Flags and fatigue photographer outside courthouse at Scranton, PA.